THE CONVERSATION STARTED ON 4/20/2019 AT COACHELLA EASTER WEEKEND -

Christiancannabis.com was created from a place of compassion. After suffering from debilitating health problems, founder and pastor Craig Gross finally found relief in cannabis. (Read the whole story here.) After this profound shift in his physical wellness, Craig began to notice the other ways that cannabis was positively contributing to his quality of life. Followed by several and ongoing encounters with God, Craig became overwhelmed, and his heart grew heavy thinking of the number of people in the Christian community that do not have access to this plant, either by legality or moral conditioning.

Knowing that publicly taking a position in support of cannabis could irreversibly damage his reputation and credibility within the Christian community, he just couldn’t stand by and say nothing. He was called to share this message so that he can help break the stigma, challenge religious beliefs that are not based in truth, and minister to his brothers and sisters in a way that has never been done before.

This led him to launch Christian Cannabis. On his journey, God has placed some amazing people in his path that share his passion and commitment to support those in the Christian community that are open to the idea that cannabis might be the missing key to their physical, emotional, and spiritual wellness they are seeking.

As more people become open to alternative methods of healing, we are committed to educating, supporting, and empowering Christians, and all people, as they navigate the world of cannabis and plant medicine, perhaps for the very first time, in a way that feels safe.

Regardless of why you are here, please know that you are so welcome.

Your questions, your curiosities, your fears. All of it is welcome. We seek only to empower you.

We are so grateful you’re here.

A week prior to launching the website, Craig reached out to Jonathan Merritt who writes about the intersection of religion, culture and politics for The NY Times, The Atlantic and many other publications. Craig connected him with several people and in July The NY Times published:

The Christian Case for Marijuana
If we are concerned about justice and the mitigation of pain, we must get beyond the just-say-no mentality.

Conversations around the medicinal and recreational uses of cannabis are abundant. However, it saddens us that in our modern culture, the use of cannabis is only being viewed through those two contexts.

Since the beginning of documented time, cannabis has been used in spiritual practices and traditions amongst people groups and religions from all over the globe.

However, because of the way cannabis was outlawed in the 1930s, and then propagated as “the gateway drug” in the 1960’s and ‘70s, we have a lot of cultural conditioning to undo in an attempt to help people see cannabis for the amazing gift that it is, and the profound spiritual potential it has.

We are so grateful to have experienced this potential of cannabis, and time and time again, we have witnessed the way it can transform lives when used as a tool or in support of spiritual practices like prayer, meditation, worship, dancing and writing.

We believe it is our responsibility and a great honor to share with others the fantastic potential of plant medicine. We believe that cannabis is spiritual and we can show you how.

Cannabis is amazing for physical health, mental and emotional balance, and fun.

It’s also an incredible way to connect to yourself and God.

Cannabis has been used in spiritual practices and traditions around the globe since the beginning of documented time. People groups, religious traditions and indigenous tribes have revered the spiritual potential of the cannabis plant for hundreds of generations.

The Rastafarians of Jamaica have used cannabis to create a sense of commune with the Divine and sensations of tranquility necessary to connect to God. In india, Buddhists, Naths and Shaivites have used cannabis to deepen their meditation practice and enter profound states of stillness. Hinduism believes that their God, Shiva, used cannabis frequently through a drink called bhang, which is still commonly used to this day in spiritual practice.

Ancient Japan believed that the cannabis plant drove away evil spirits, as evil and purity can’t exist in the same place at the same time. Taoists from China used cannabis to promote well-being and induce states of exaltation.

We hope to be among a group of Christians that are bold in their faith and their experiences with cannabis to share the good news that cannabis is spiritual. It has a place in your practice of prayer and worship. And that it can help you connect to God in a deep and profound way. 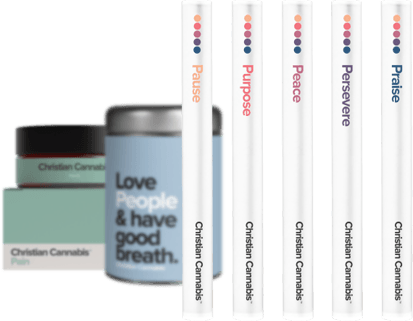 x What Do You Think About Cannabis?